The port cities of America in the late colonial and Federal period were not quaint. Urban land speculation and its attendant evils of shoddy housing, over crowding and unconscionable profiteering thrived. An English traveler, Isaac Weld, described Philadelphia's Water Street in his Travels Through the States of North America...During the Years 1795, 1796 and 1797:

"Behind these wharfs, and parallel to the river, runs Water-Street. This is the first street which you usually enter after landing, and it does not serve to give a stranger a very favourable opinion either of the neatness or commodiousness of the public ways of Philadelphia. It is no more than thirty feet wide, and immediately behind the houses, which stand on the side farthest from the water, a high bank, supposed to be the old bank of the river, rises, which renders the air very confined. Added to this, such stenches at times prevail in it, owing in part to the quantity of filth and dirt that is suffered to remain on the pavement, and in part to what is deposited in waste houses, of which there are several in the street, that it is really dreadful to pass through it.... " (pp.3-4)

Most modern histories of the yellow fever epidemic say that refugees from the country we now call Haiti, mostly white French colonialist and their personal slaves, brought yellow fever to Philadelphia. All American ports then were alive to the threat to public health that immigrants posed, but at the time there was mostly sympathy for the once rich French, not fear of their diseases even though some had the flu. In general it was the immigrants to the New World who suffered as they failed to survive what was called "seasoning," that first year in the New World which after two hundred years of experience Europeans had come to realize could be very dangerous.

For example an Englishman who had just arrived and an Irish woman who had landed in June 1793 both died at Dennie's North Water Street boarding house on August 4 and 6 respectively. 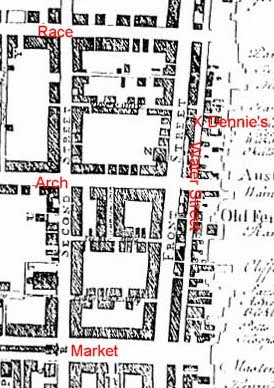 Both were well attended thanks to the tax supported Overseers of the Poor and the privately supported Dispensary which assigned two young physicians, Philip Syng Physick and Isaac Cathrall, to treat the unfortunate emigrants. Physick thought the Englishman, a Mr. Moore, died so quickly that he might have been poisoned. Physick performed an autopsy, but found nothing suggesting poison. 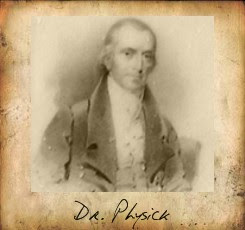 In time Physick would become America's leading surgeon but even as a young man he had impressive bona fides. After getting his medical degree at Edinburgh, then the leading medical school in the English speaking world, he worked with Dr. John Hunter in London, arguably the leading doctor in the English speaking world. Isaac Cathrall ha also just returned to Philadelphia from medical studies in Edinburgh, London and Paris.

Cathrall marveled at the long morbid dance the fever put the Irish woman, Mrs. Parkinson, through: severe head and back pains, great thirst, offensive stools, much vomiting, delirium, red spots on face and breast, blindness, sore throat, hiccuping and death. She had languished a room away from the Englishman whose symptoms, coma and death in 24 hours, were completely different.

Her family remained healthy. Malignant as the fever was, it evidently was not contagious, and so what passed was deemed business as usual on Philadelphia's Water Street, the storied landfall for most emigrants where not much account was taken of those who died before they moved beyond it.

When the city organized the Bush Hill fever hospital, Physick and Cathrall were made the attending physicians, which meant that they visited the hospital every day. They used their association with the hospital which mainly served the poor to conduct more autopsies on fever victims. This was common procedure in London and Paris where the use of poor patients could go to the extreme of not treating them in order to study the natural course of a disease. There is no evidence that Physick and Cathrall did that. However, they were replaced at Bush Hill by Dr. Deveze who was an recent immigrant with no private patients and was able to devote all his time to the hospital.

They did not keep their autopsies secret. In the midst of the 1793 epidemic they published a summary of their findings after several autopsies. It makes interesting reading in two respects. It shows that doctors then appreciated the importance of morbid anatomy. In his account of the epidemic, Dr. Benjamin Rush quoted this autopsy report in full seeing its findings as supporting his analysis of the disease. More interesting is that such a report was printed in a popular newspaper during the epidemic:

Being well assured of the great importance of dissection of morbid bodies in the investigation of the nature of diseases, we have thought it of consequence that some of those dead of the present prevailing malignant fever should be examined; and, without enlarging on our observations, it appears at present sufficient to state the following facts.

1st That the brain in all parts has been found in a natural condition.

2d That the viscera of the thorax are perfectly sound. The blood, however, in the heart and veins is fluid, similar, in its consistence, to the blood of persons who have been hanged, or destroyed by electricity.

3d That the stomach, and beginning of the duodenum, are the parts that appear most diseased. In two persons who died of the disease on the 5th day, the villous membrane of the stomach, especially about its smaller end, was found highly inflamed; and this inflammation extended through the pylorus into the duodenum, some way. The inflammation here was exactly similar to that induced in the stomach by acrid poisons, as by arsenic, which we have once had the opportunity of seeing a person destroyed by it.

The bile in the gall-bladder was quite of its natural colour though very viscid.

In another person who died on the 8th day of the disease, several spots of extravasation were discovered between the membranes, particularly about the smaller end of the stomach, the inflammation of which had considerably abatted. Pus was seen in the beginning of the duodenum, and the villous membrane at this part was thickened.

In two other persons, who died at a more advanced period of the disease, the stomach appeared spotted in many places with extravasations, and the inflammation disappeared. It contained, as did also the intestines, a black liquor, which had been vomited and purged before death. This black liquor appears clearly to be an altered secretion from the liver; for the fluid in all respects of the same quality was found in the gall bladder. The liquor was so acrid, that it induced considerable inflammation and swelling on the operator's hands, which remained some days. The villous membrane of the intestines, in these last two bodies, was found inflamed in several places.

The liver was of its natural appearance, excepting in one of the last persons, on the surface of which a very few distended veins were seen; all the other abdominal viscera were of a healthy appearance.

The external surface of the stomach, as well as of the intestines, was quite free from inflammation; the veins being distended with blood, which appeared through the transparent peritoneum, gave then a dark colour.

The stomach of those who died early in the disease was always contracted; but in those who died at a more advanced period of it, where extravasations appeared, it was distended with air.

Cathrall continued to study the black bile that caused inflammation of his hand, and in a monograph published in 1794 concluded that it did not cause yellow fever.