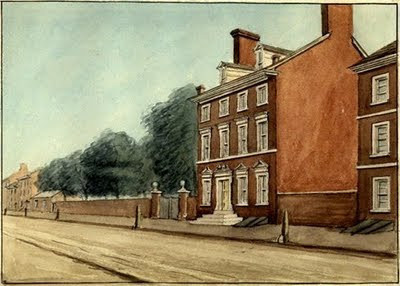 In 1793 there were neither policies nor precedents about how the federal government should react to a deadly epidemic in the nation's capital. Government officials and employees did not work in offices set apart from the rest of the city. The President lived in a rented mansion flanked on one side by a shady garden, but he had neighbors though it was in a more thinly built part of the city. In the first week of September one of his neighbors, Dr. Caspar Wistar, was sick with yellow fever.

Well before the epidemic, George Washington planned to leave the city. High Federal officials generally left the capital in September. Congress was not in session and it was a good chance to relax before Congress assembled in November or December. In 1793 Washington was expected to attend the ceremonial laying of the cornerstone of the new Capitol building in the new City of Washington, scheduled for September 17. The painting below, done in the 1790s, arranged Washington's family around the plan for the new capital city and captured the President's interest in the city that would bear his name. 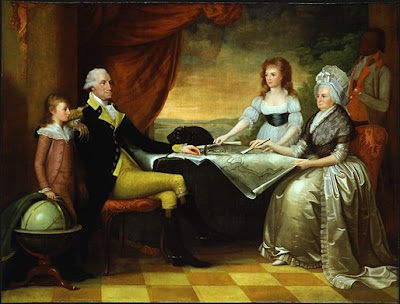 Treasury Secretary of Alexander Hamilton was unable to attend a cabinet meeting on September 6, sending word that both he and his wife had yellow fever. The death of Dr. Hutchinson on September 7, while good news for the President as the doctor was a leader of the opposition party that had been personally attacking the President, his death undoubtedly colored the President's view of the health of the city.

On September 9, on the eve of his scheduled departure, the President wrote to Secretary of War Knox about a rumor about French intentions, adding:

I think it would not be prudent either for you or the Clerks in your Office, or the Office itself to be too much exposed to the malignant fever, which by well authenticated report, is spreading through the City; The means to avoid it your own judgment under existing circumstances must dictate.
( Washington to Knox )

It is a fair interpretation of this letter to suggest that Washington was anxious to leave and thought the best policy for the Federal government to follow was for all unessential employees to leave the city. At that time the Federal government had no means to respond to the epidemic. It did not employ any doctors, nurses, or anyone else in or near Philadelphia who could respond in an official capacity to the epidemic. There were no soldiers stationed in the city, nor was there a Federal police force of any kind.

Washington left the city with his wife, family and servants on September 10. In a September 25 letter to his secretary Tobias Lear, written from Mount Vernon, he described what he was thinking when he left:

We remained in Philadelphia until the 10th. instr. It was my wish to have continued there longer; but as Mrs. Washington was unwilling to leave me surrounded by the malignant fever wch. prevailed, I could not think of hazarding her and the Children any longer by my continuance in the City the house in which we lived being, in a manner blocaded, by the disorder and was becoming every day more and more fatal; I therefore came off with them on the above day and arrived at this place the 14th. without encountering the least accident on the Road. ( Washington to Lear )

One could argue that on the 25th the President had put the onus for leaving on his wife, and that personally he wished to stay, mindful of the affect that might have on the morale of the afflicted city. That is a far cry from the sense of foreboding expressed in his September 9 letter which authorized the flight of Federal employees.

In writing a history of the epidemic, it is easy to forget the novelty of the situation and how that forced those living through the epidemic to not act as consistently as a historian might wish. Two things may have happened to change Washington's attitude between the 9th and 10th. Both Secretary Hamilton and Dr. Wistar responded to treatment and were thought to be out of danger. And Samuel Powel, a former mayor of city, declined Washington's invitation for his wife and he to accompany the Washington's to Mount Vernon.

Powel's wife expressed their regrets, writing to the Washington's that her husband thought he "thought there was no propriety in the citizens fleeing from the one spot where doctors were conversant with the treatment of the fever...." Powell died of the fever a little over two weeks latter. Powel 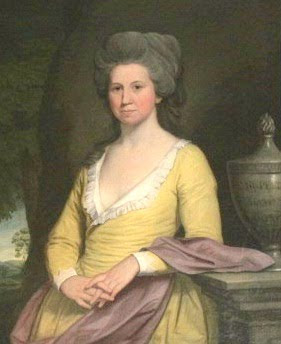 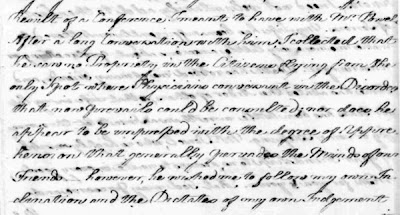 This version might be viewed as bending over backwards to burnish the image of the President, but his actions at the end of the epidemic suggest that he was indeed more mindful of the city's morale than his own safety.

In a letter to the President, ﻿Speaker of the House John Trumbull of Connecticut worried that the city would still be unsafe when Congress was scheduled to convene in December. Washington quizzed his advisers on his power to convene Congress in another place. He asked two officers still in or near the city if the suburb of Germantown was safe and if all the terrible things he had heard were true, that many "of our acquaintances have fallen victims...; that near 4000 have died, and that the disorder rages more violently than ever."

His advisers split on whether he had the power to convene Congress elsewhere. Jefferson and Madison worried that removal might jeopardize the compromise that
moved Congress from New York to Philadelphia in 1790 and would move it to the banks of the Potomac River in 1800.

As for the state of the city, Postmaster General Pickering had been going every day to Walnut Street to encourage the bedridden Dr. Rush, an act of courage given that no less an authority than Rush was certain that his house was the most infected place in the city. Pickering noticed that unlike the week before, Rush's house was no longer "thronged with applicants for assistance." Rush's two remaining apprentices, Coxe and Fisher had been joined by an old student James Woodhouse, and they continued giving out medicines and making visits for Rush. They agreed that on the 12th and 13th of October the number of applicants had "sensibly lessened." Pickering dashed off a note to the president with the encouraging news. And Germantown had to be safe. Governor Mifflin was still there.

Washington decided that, while it was still unsafe to return to Philadelphia, he could go to Germantown. He told his cabinet to rendezvous with him there on November 1.

Sickness in Philadelphia seemed to decline through October, then there was a sudden spike in cases, and a feeling of gloom returned. His cabinet advised caution. Attorney General Randolph warning that "we have not yet learned, that any radical precautions have commenced for purging the houses and furniture."

No matter. ﻿President Washington made a day trip to the city on the 11th, a day before the all clear.
Posted by Bob Arnebeck at 6:48 PM